Rob Grant director of last year's micro-budget self-examining sleeper Fake Blood returns with a full length feature Alive. A man (Thomas Cocquerel) wakes up covered in wires, bandages, stitches, and tubes. He puts his hand up to shield himself from the bright overhead lights. He realizes that he is on a hospital gurney. Tubes are pulled he falls to the ground attempts to crawl only to be scooped up by the mysterious caretaker (Angus Macfayden) who is apparently in charge of his care. One day the man wakes up to find a woman (Camille Stopps) on a bed beside him. She starts to ask him questions about who he is? Does he know how they got there? Is there a relationship between them and a hopeful does he know who she is? 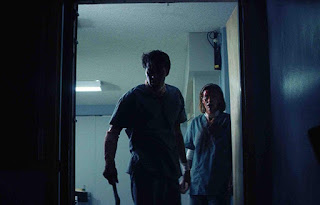 Rob Grant presents a story that unspools deepening degrees of horror. The pair is not sure if their caretaker is a friend or foe. He claims that he recused them, he's the one helping them heal but he will not allow them to leave or contact anyone outside as the woman maintains that loved ones must be looking for them. The narrative is set in what appears to be an abandoned and isolated hospital. There are no central or overhead lights, most of the doors are barricaded or lead to brick walls. The garden out back is topped by thick rounds of barbed wire fence.

The pair continues their efforts to piece together their past. The woman has the feeling that she has a child out there somewhere. The man thinks that he may have been bad in the past possibly spending time in prison before the event. The duo decides to force their departure attempting to navigate the labyrinth of hallways, stairs, freezers and makeshift surgery stations rigged with obstacles set up by the caretaker who has his trusty rottweiler at his side for the pursuit.

Alive is more of a mystery than a horror film. The man and woman are is a tough predicament seemingly suffering from amnesia and both weakened from the ordeal, stress, and fog of medication from their partial recovery.  The couple finds some clues around the hospital and in flashbacks that can aid to patch together their pasts. But ultimately the physical and psychological trauma relating to their current situation keeps them trapped in fight or flight mode. Grant leads the audience to a payoff that is both rewarding and terrifying making the film one that I can definitely recommend.