Edmond (Bruno Todeschini) The Patriarch of a well to do French family that made their fortune importing French perfumes in 1863 Missouri declares that he and his family have nothing to fear from the advancing Union soldiers because they are French and neutral in the Civil War. His theory falls apart when Union soldiers turn up at a local Soiree threatening the pampered aristocracy forcing the family to flee for Paris. The family has three daughters all well known to society and ready for marriage Abigaelle ( Maryne Bertieaux) who was betrothed to Monsieur de Lisle (Gregoire Colin) killed in a deal gone wrong with Victor (Kevin Janssens) a put together and resourceful  brute at his side. Victor tells Edmond the news of Mr. de Lisle's fate. The former is hired by the latter to take his family cross country to leave the U.S. for France. 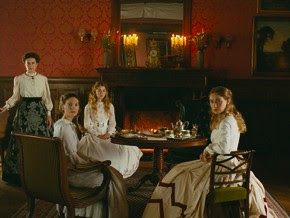 Along their journey, they encounter the architect of Victor's earlier deal gone bad Bettie (Kate Moran) who shares a past with Victor. Victor grows close to the youngest daughter Ester (Alice Isaaz) who along with their sisters ditched the fancy gowns and jewelry for more practical clothing . They lean to shoot and ride horses prepared to do what it takes to survive. 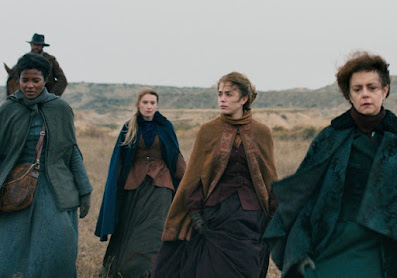 It's always of interest when a foreigner presents their vision of the American Wild West. David Perrault focuses on a time when the French were still prominent in the south especially in Missouri and Louisiana and the language was regularly spoken at home and in society. His story chronicles a harsh journey across the American West , through mountain passages and into the cold of winter. Abigail feels the effect of the trip the most while the family matriarch keeps a watchful eye on the family maid Layla  (Armellle Abibou) who she believes is too close to her youngest telling her stories and the tenants of voodoo and to her husband who she thing got up to no good in his locked study.

Savage State is the story of a family that flees the trappings of their gentile southern lifestyle when threatened by the new rules and laws enacted by the Union conquerors. There are elements of jealousy, violence, and suffering on full display that leaves no character untouched. Many of the central players appear one way at the outset, grow during the journey then evolve again later in the story. It's a different take of a fall from the grace to relying on a strong based will for survival in a Western setting guided Parisian French ideals.

Posted by Francis McKay at 9:20 PM