A futuristic threat, gunplay, chase scenes, style, high wire stunts, a lead defending the honor of their sister and nitrous oxide.  All the elements one would expect from a Fast and Furious franchise spinoff is all here. Director David Leitch whose action chops include a hand in John Wick, Atomic Blonde and Deadpool 2 whose star Ryan Reynolds entertains as Hobbs (Dwayne Johnson's) handler give the viewers what they want right off the get-go. Two side by side scenes of Hobbs and Deckard Shaw (Jason Statham) taking out the bad guy with an unusual choice of weapon in L.A. and London respectively. 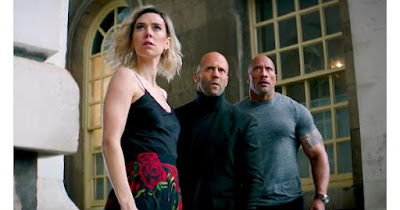 London is where the action kicks off. M.I.6 are safeguarding a biological weapon that part machine Brixton (Idris Alba) a former colleague of Shaw's intercepts a military convoy to try to steal. Decklan Sister Hattie (Vanessa Kirby) injects herself with the virus and escapes. Now she has 72 hours before it activates inside her, then goes airborne spreading rapidly with deadly consequences. Hobbs and Shaw are recruited separately to work together to stop the threat. 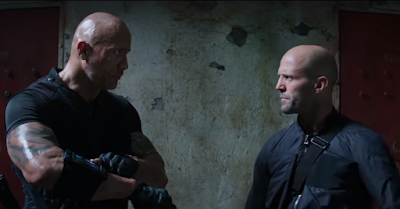 The narrative is full of verbal sparring and one-upmanship by the two leads. They have their fights each getting in their licks along with Shaw's verbal threats to Hobbs to stay away from his sister. Brixton is being driven by paramilitary, tech, media, scientific group Eteon. They have their hands in everything controlling enough media outlets to spin a story any way they want. The action moves to Ukraine then on to Samoa where there is a final showdown with old world fighting tactics and weapons take on the super modern biometric ones. A few key characters pop up in the latter part of the film that injects energy into the proceedings playing a large part in moving the mission towards success.

Idris Alba and Vanessa Kirby do not take a step back from the two leads. There are several scenes with either facing off with the above the line stars where they give more than they get. The motorcycle stunts alone though the streets of London and burned out abandoned Ukraine Nuclear plant are worth the price of admission. It's a true popcorn movie that checks all the boxes for an action-fantasy thriller.

Posted by Francis McKay at 5:18 PM