The King of Quirk Wes Anderson returned in 2012 with an a new feature. Set in 1965 New England and starting three days before a major storm we meet Suzy who lives in a lighthouse with her parents Walt and Laura Bishop ( Anderson Uber regular Bill Murray) and Frances McDormand plus her three younger brothers. Suzy (newcomer Kara Hayward) wants out.  She is very smart does not have any real friends and does not get along with her family. She finds a partner for her plan in Sam ( Jared Gilman) who she met by chance at a church production of Noah's Arc one year prior. The two began writing to each other and hatched a plan to meet in a field near Suzy's home and leave their current worlds behind oh by the way they are both 12 years old. 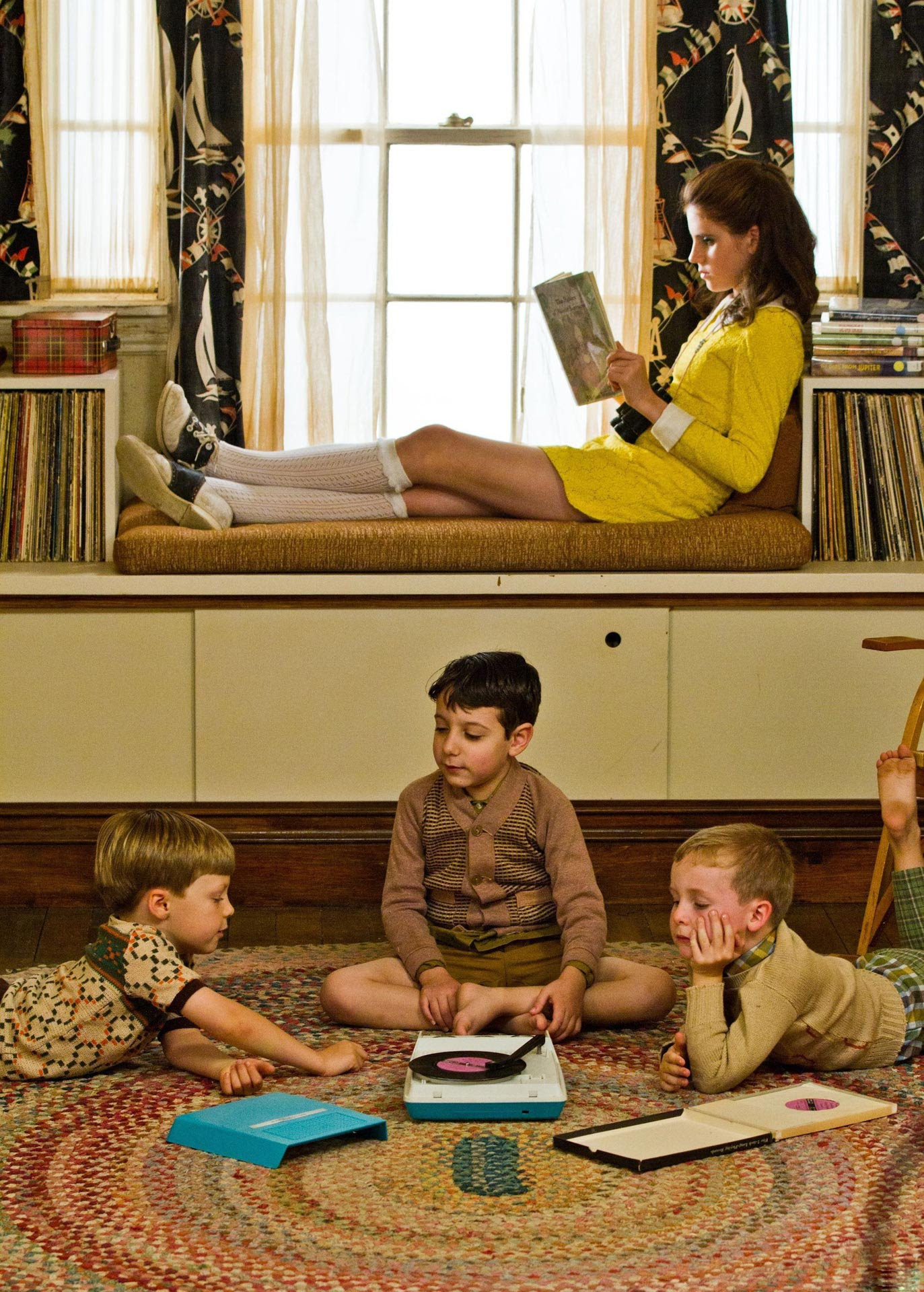 All of the Anderson elements are her in this film. Off centre shots of the main character on screen, events set in the past, young smart protagonists and dysfunctional adults and families. Anderson choices on how to shoot a scene are unique. This is especially evident with the scenes featuring the narrator played by ( Bob Balaban). Each time he came on screen to provide information about the island, the storm or input as a former teacher of Sam the viewer is presented with Balaban in a different part or the shot.

Another key Anderson element is the use of colour in his films. Here he uses vivid yellows, red, blues,  greens, browns and of course Khaki. Another key element to the story is the fact that Sam is an excellent watercolour artist and is very comfortable behind an easel as he works on a piece. 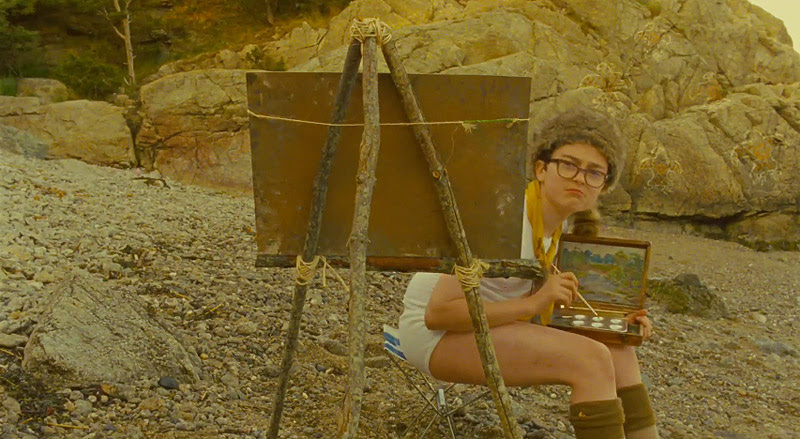 The film moves in a linear pattern except for a wonderful passage which details the back story of Sam's original meeting with Suzy and then shows a series of hand written letters between the two over the year up to the point their plan is hatched and their meeting point chosen. 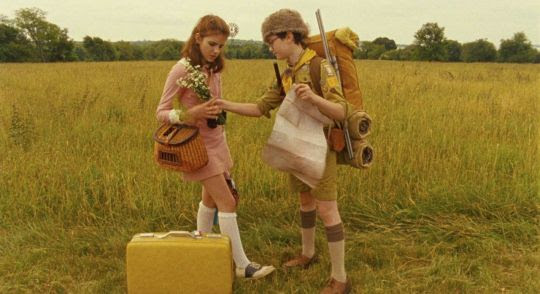 The music used for Moonrise Kingdom fits excellently into the narrative. The opening piece The Young Person's Guide to Orchestra Op.34 plays on an old time battery operated plastic record player pointing out the four different families of the Orchestra for the young listener as we move through the lighthouse and view different couplings of Suzy's family.  The Khaki Scout Camp Ivanhoe has its own theme featuring crisp snare drums with and undertone of a native rhythm. Francois Hardy's  Le Temps De L'amour  a gift from Suzy's godmother (who lives in France) plays in the background as the pair awkwardly get closer to each other after they reached their destination.  The upcoming storm is represented by 4 original pieces by Alexander Desplat's each titled Historic Weather Conditions building each time the weather turns for the worse lading up to the big storm. The last piece to mention is  Friday Afternoons Op.7 sung by a school choir that will leave the viewer humming cuckoo ~ cuckoo at the end of the film.

Moonrise Kingdom features many very good performances the best of which is Ed Norton as the beaten down Scout Master Ward who first looses Sam and then the whole scout troop. The opening scene at Camp Ivanhoe where the camera follows Norton across the screen as he barks out directions and administers punishments to various Khaki scouts is worthy of the best Drill Sargent. Also memorable is his repeated disbelief that the records did not show that Sam is an orphan. Scout Master Ward is also strong when he makes his way to the the Large Scout Camp Fort Lebanon where Commander Pierce ( Harvey Keitel) strips him of his title but Ward is quick to act and regains respect saving Commander Pierce from a cabin as the storm hits. Ward then leads the boys to the designated sport for shelter at the local Church. 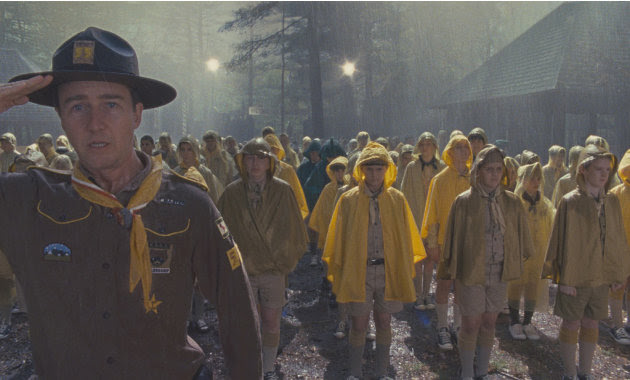 Kaya Hayward is particularly strong as Suzy. It is clear that she's the leader. Sam looks to her to determine what to do and when action is required when they are tracked down by the Khaki Scouts its Suzy and not Sam that takes it.  Two very good scenes are when she reads from her favourite stories first to Sam and then to the whole scout troop after they team up to help Sam and Suzy with their second attempt to escape . She pauses after a passage and in both instances is encouraged to continue and assured that her audience is listening to the story. She is also almost always armed with her binoculars which she considers to be her super power as the characters in her stories all have powers.

Set design choices reflect the characters personalities  the best illustration is the cramped residence of the island sheriff Captain Sharp (Bruce Willis) The narrow sleeping area and living space is what one would expect from a longtime bachelor. The lighthouse set which serves as home to the Bishops is used to the maximum in the opening sequence and is also the perfect vantage point for Suzy to perch at its summit and through her binoculars see all that takes place on the Island.

Moonrise Kingdom is an excellent project in movie making and one that I highly recommend.