The IMF is in front of a Senate committee for events that occurred at the Kremlin in Mission Impossible-Ghost Protocol at the opening of Rogue Nation. William Brant (Jeremy Renner) is advocating for the IMF while CIA director Alan Huntly (Alec Baldwin) argues against. Because of their destructive actions the Force is shut down and all agents called in to do desk work for the CIA. Ethan Hunt (Tom Cruise) is out in the field as the London Check-in is compromised. He knows who is behind it and will not come in until he catches his target.

The adventure brings the team to Austria, London, Morocco and back to London. The Mission impossible elements are all present. Masks, unique check in points, identity swap, car chases, motorcycle chases and penetrating an unpenetrable location. Another big factor in a Mission Impossible film is innovation. Rogue Nation delivers in this category as well. The first being a palm print vehicle entry and the second being a wet suit equipped with a digital timer and oxygen indicator on the wrist area of the glove. 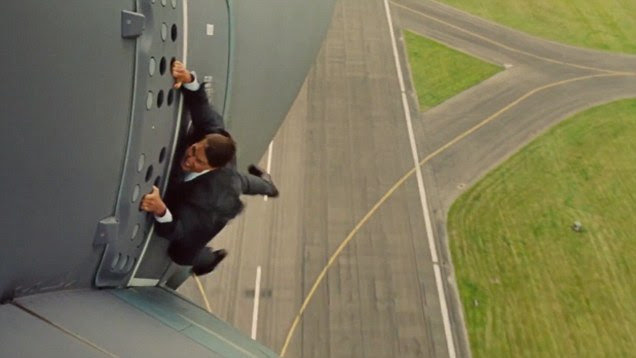 Writer/director Christopher McQuarrie crafts a high-energy face passed film from the pre-opening credits scene. The story is intriguing, the script contains few throwaway lines and editor Eddie Hamilton scaled the film expertly. A key element in all action films is sound which the team met their target for tis production. The department's work particularly is notable during the motorcycle chase scene through the alleys, streets and highways of Casablanca and when Cruise free dives into an underwater vault bringing the element of muffling into the picture.

The teams mission is to track down the leader of a black bag group called the Syndicate a brain child of the West using dissolved or presumed dead agents to change the course of politics affording deniably cover to Western Governments.  Their leader Solomon Lane (Sean Harris) has gone rogue facilitating large disasters to achieve their goals faster before full approval of their activities have been authorized. Tom Cruise continues to shine as Ethan Hunt. The 53 year old does not look out of place in the role that he started playing back in 1996. While other action franchise leads get stale in the role after three or four outings Cruises performance in Rogue Nation may be his best yet as Ethan Hunt.  Not surprisingly a Sixth film has already been announced. Simon Pegg returns as Hunts sidekick and frequent source of comic relief as Benji Dunn. Directly effected by the dismantling of the IMF at the start of the film and relegated to playing Halo 3 at a desk all day dodging passerby's he springs back into his technical expert role when called to Vienna by Cruise under the ruse of winning opera tickets.  Relative newcomer Rebecca Ferguson is very effective as Ilsa Faust. Exuding all of the best qualities of the European female spy the audience is never sure whose side she is on as she plays off everyone in the piece. Look for Alec Baldwin in a key supporting role as CIA director Huntly. He plays a key role at the beginning, crux and closing sections of the film.

Mission Impossible-Rouge Nation is an outstanding entry into the series that shows that there is plenty of life left in the franchise. The returning cast members turn in enthusiastic performances plus the new main players deliver what's expected in their recognizable spy film roles. The narrative is fresh and crisp making this a film I can definitely recommend.