Eric Wright A.K.A. Easy E (Jason Mitchell) drives up to a Compton home in the middle of the night. He gets out, pulls out a gun and a wrapped package from below the spare tire in the trunk and heads into a Dope house. The deal goes bad and Easy barley escapes. Nearby Andre Young A.K.A. Dr. Dre (Corey Hawkins) is listening to records in his mother's home. She's not happy that he's not working or gong to school leading Dre to head to a friend's to occupy a couch. About the same time O'Shea Jackson A.K.A. Ice Cube (O'Shea Jackson Jr.) is writing lyrics in a notebook on a high school bus. A local gang leader comes on the bus to threaten some heckling students. The gang member then gives a stay in school speech and leaves. This is how the audience is introduced to the three main members of N.W.A. The business man Easy E, melody maker Dr. Dre and lyricist Ice Cube.

The film is a tour of late eighties Los Angeles. It touches on the large social events, the political landscape, and gives a glimpse into the record industry. It chronicles the birth of gangster rap where 5 guys put the stories of their experiences in the streets to paper, mike and record. It also touches on the controversy of the genre. Is the music causing violent angry criminal behaviour or reflective of what is going on in the community. 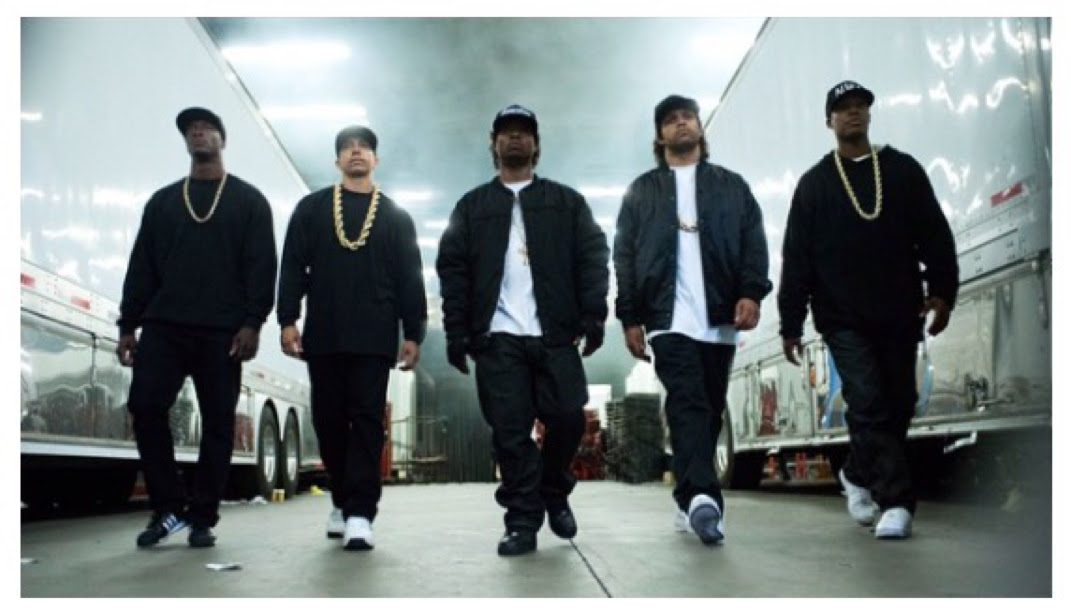 Jonathan Herman & Andrea Berloff's screenplay raises several powerful points. One memorable sequence occurs as the group speaks at a press conference following being arrested in Detroit the night before. They are asked about the violence, the drug use, the guns and the criminal elements in their songs. Ice Cube responds with a question of his own.  How are the drugs and guns getting hit his community? None of them have a passport nor does anyone in their community own planes.  The aforementioned riot was caused by ignoring a warning not to sing the song F**ck the Police. The creation of that song is another big point in the film. The group is recording in Torrance for their producer Jerry Heller (Paul Giamatti) when they go outside on a break. Immediately two police cars pull up and the boys are forced on the ground with their hands behind their back. Heller comes out explains that the group are Artist. The police yield, the group goes back in and Ice Cube writes the lyrics to the song from this as the topper of many similar experiences.

Director F. Gary Gray uses a lot of unique devices and strong passages to build tension in the film. He intro's the three main players individually displaying their given then known names in the background of the scene. The two other members M.C. Ren (Aldis Hodge) and DJ Yella (Neil Brown Jr.) are first seen in a group scene at the R & B club where Dr. Dre D.J's at night.  He shows Compton 1986 with police helicopters and stop and searches are regular occurrences. He displays the Rodney King beating and verdict a year later through the eyes of the band. Then Gray uses quiet moments to introduce future monsters in the industry Suge Knight, Snoop Dog and Tupac. 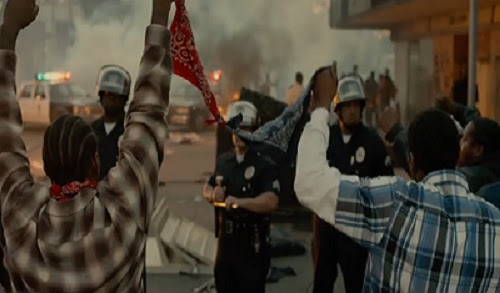 Jason Mitchell stands out in his portrayal of Easy E in the film. Easy E had the money to start Ruthless Record and get Studio time.  He sang their first hit Boys in the Hood that attracted airplay and the attention of future manger Jerry Heller. O'Shea Jackson Jr.  gives several looks in the film that remind you of his dad Ice Cube. He also displayed timely comedic barbs and powerful command of the stage when delivering a lyric. R. Marcos Taylor is a scary and unpredictable as the real Suge Knight in the film. Easily switching from smiling and helpful to violent, pit bull wielding, pistol- whipping goon the next.

Straight Outta Compton is a historical journey through lat 80's early 90's Los Angeles as seen through the eyes of 5 teenagers who grew up in the tough town of Compton. The film gives a full flavour of the time pulls no punches nor attempt to be balanced. The film portrays the World Most Dangerous Group featuring their in your face raw lyrics and bold rich beats. It's violent, intense, riving and emotional a film that I can definitely recommend.

Posted by Francis McKay at 8:48 PM