Matt (Adam Brody) and Larissa (Amanda Crew) have been in their new dream home in Saratoga Springs for only a couple of weeks. Larissa is very pregnant due any day now and very careful with what comes into contact with her expectant son. Matt is a lawyer in a busy firm lets Larissa have her way as his loving Cop father Clifford (Booth Savage) is in the picture along with Larissa's out of town sister Jessica (Krista Bridges) both ready to help in any way.  One day our heroine goes out to get the mail meeting the next door neighbour Ann (Sheila McCarthy) who seems saddened dressed in a long black dress in the middle of summer.  She says hello then spots Ann's daughter Isabelle (Zoe Belkin) in an upstairs window staring down at her. Immediately she feels pain in her stomach, blood gushes and she is rushed into surgery where she's recorded as clinically dead for a minute. The other major consequence of the event is the stillborn birth of her son. at her son. Matt is also warned by hospital staff that he may see changes in his wife from the significant trauma of the ordeal. These changes manifest in Larissa hearing the baby in the nursery, seeing Isabel staring at her relentlessly from the second story window across the way and feeling guilty for what she must have done wrong to cause the miscarriage. 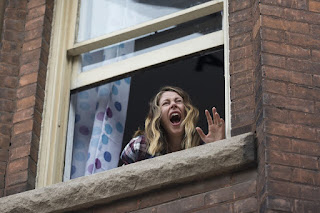 The narrative builds on that one minute flat line for a good part of the story. Larissa at first says she did not see anything, then admits that she saw flames and felt that she was being pulled down into them. Matt sensing that he cannot get through to his wife who has become lethargic and pouty brings in the hospital priest Father Lopez (Dayo Ade) first at the hospital then to the home but Larissa is cold and dismissive to him on both occasions. He next turns to his sister-in-law who flies in to bring her sister to a healer who sees the presence of an evil spirit fighting to take control of her soul that she must fight off by demonstrating a strong will to live. This is complicated by an event in her past and some other large family mental health issues.

The other branches of the story focus on Larissa's post-miscarriage depression and the odd history of the family next door from past reports and current goings-ons in the home. The writing-directing team of Donald Martin and Robert Heydon likely would have served the material better by narrowing the focus of the story. The strongest acting comes from the always reliable Sheila McCarthy in the small role of Ann. She is a god fearing woman who punishes herself for her shortcomings in dealing with her daughter and not doing enough to stop her husbands' actions that had a devastating effect on her child and family.

Isabelle is the story of a young woman dealing with the after effects of a miscarriage topped off with a near death experience. For an extra helping of stress, the next door neighbours have a history of satanic rituals performed by father on his daughter leaving her alone in a locked room staring into the Kane's bedroom. Director Heydon gets the isolating psychological trauma ramped up early with the final segments truly showing Larissa's level of the jeopardy. However, the sections linking the initial shock and final standoff don't cover any new ground that would put the film near the top of the list in the crowded psychological horror genre.