Two things are needed when viewing a Sion Sono a film. The first be willing to suspend belief. The second, no matter how wacky things are going on screen remember Sono has a plan that will yield a satisfying result in the end.  This principal is never truer than for his current feature Love & Peace where the co-lead character is a Godzilla sized turtle. 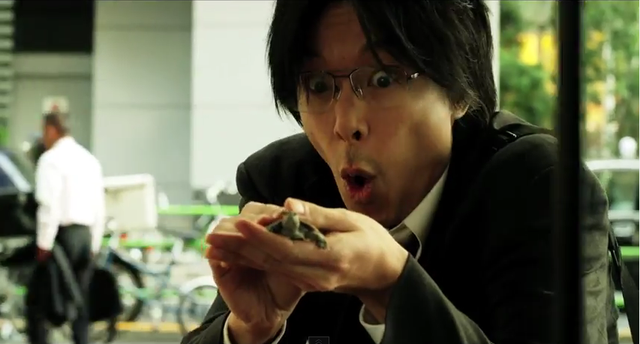 Ryochi Suziki (Haroki Hasgawa) is a failed musician who had a glimmer of fame in his early twenties. He's now confined to a dead end job making parts for musical instruments. Suziki is constantly ridiculed by his co-workers for his clumsiness and awkwardness but has one friendly face at work Yuru Tarajimi (Kumiko Aso). One day on his lunch break he buys a miniature turtle that he takes home and names Pikadon. The turtle becomes Ryo's muse singing out song melodies and inspiring lyrics in a very unusual manner. However when his colleagues tease him about the pet Ryo flushes Pikadon down the toilet temporarily separating them and beginning an adventure in the sewers for the tortoise. 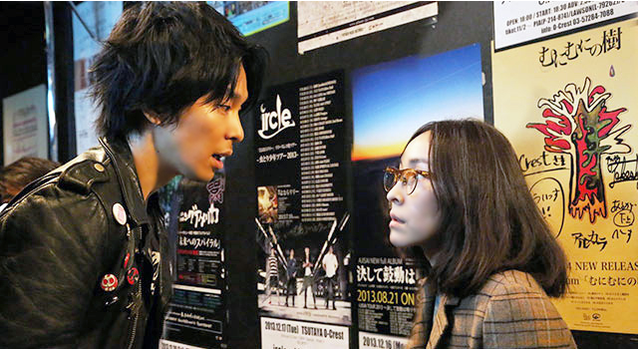 Writer/Director Sino Sono presents a fantastical story whose narrative is split above and below Terra Ferma.  Below ground Pikadon arrives at an underground workshop of Pa (Tokiyuski Yashida) who takes in abandon toys and animals that make their way to his door. Then through magical glowing gumball sized potions he gives them the ability to speak. The fixed and repaired orphans stay with Pa battling their desire to return home. Meanwhile above ground Ryo's popularity continue to grow and a mistaken dose of a wish potion fed to Pikadon gives the tortoise the ability to fulfill his owner's dreams. The side effect being that as Ryo's career advances so does the size of his pet.

Haroki Hasgawa delivers an exaggerated manic physical performance as Ryochi Suzuki. He is meek hunched and paranoid at the start of the film. But with the aid of his muse progresses to leather clad rock star then on to a David Bowiesque solo performer. Kumiko Aso is strong as Yuru Tarajimi she is often dressed in two many layers sporting her horn rimmed glasses with her awkwardness going mostly unnoticed due to the presence of Ryochi in the office. Tokiyuski Yashida is superb as the mysterious sewer dwelling Pa.

Love & Peace is a magical fairytale set on the streets and in the sewers of Toyko. The screenplay finds Sino Sono at his creative best supported by strong performances by the cast and a melodic theme song that will make you smile as you hum it for days after leaving the theatre. It's a film that I can definitely recommend.